What is blue light and what is this new fascination with it? As an eye care provider, it concerns me because of all the negative effects it can have on the body and eyes when a person is being over-exposed to it. 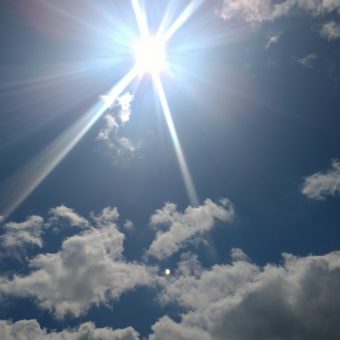 Blue light has been around since … well it’s always been around since the sun emits it and all the lights we’ve been using since electricity was discovered also emit it. So it’s nothing new per say. It’s becoming more of an issue now because of the new types of light we use – ie. the main culprit being LED. As human beings, we actually need blue light (the blue-turquoise spectrum) to function. It helps us function by regulating our cell cycles, setting our circadian rhythms (internal clock), and plays a part in memory function. Blue light is absorbed into the body via special receptor cells in the eyes where it is transported to other places in the body to be used. 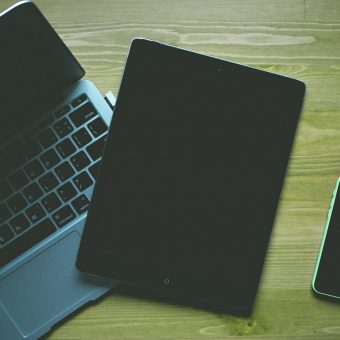 Problems have been arising with over-exposure to the blue-violet light that’s emitted by literally everything we use. TV’s, computers, laptops, phones, tablets, etc. – essentially everything we use on a daily basis. This artificial blue light is still processed the same as the “healthy” blue light we get naturally and when we spend too much time in front of devices, it messes up our Circadian rhythm by tricking the body into thinking it’s day time and it needs to be alert/awake. This is why many health care professionals recommend staying away from devices 1-2 hours prior to bedtime so our body has a chance to wind down and relax. Research has also linked working night shifts and being exposed to blue light increases the chances of several types of cancer, diabetes, heart disease, obesity, and depression. 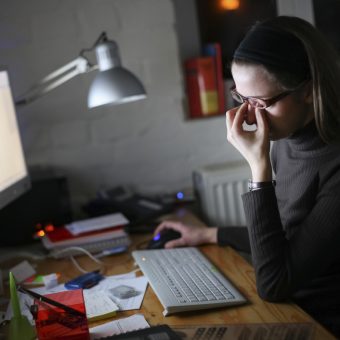 In the eye specifically, research has shown that long-term over-exposure to blue light has caused an increase in the likelihood of developing Age-Related Macular Degeneration (ARMD), it increases ARMD progression (in individuals who already have it), and has been shown to increase tumour growth (for people who have a cancerous growth). Nothing good! LED monitors have been shown to cause more digital eye-strain than other types of monitors. The reason for this is the blue light that’s emitted from LED monitors doesn’t fall in the same place as the red and green light that’s also emitted. This disparity in where the light rays are focusing in the eye causes eye-strain because we are constantly trying to focus in the blue light but in turn put the red and green out of focus – and then vice versa. 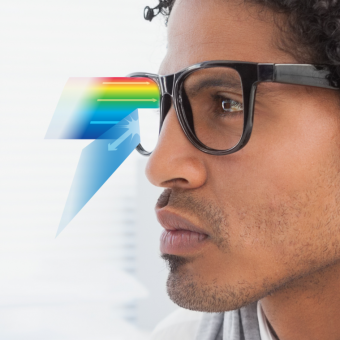 How can we protect ourselves from the evil villain blue light? For those of you that spend more than 3+ hours on a computer per day I would invest in proper coatings that block the blue light from entering your eyes. This also means switching from contacts to glasses if you currently wear contacts at the computer. Many different manufacturers produce this coating for their lenses including Nikon, Essilor, and Hoya (these are my trusted brands). Other manufacturers may claim to produce the same coating but how well they protect your eyes in comparison to the mentioned above I am not sure. This blue-blocking coating does not appear too different from the regular anti-scratch/anti-glare coating you would regularly purchase – it just has a slightly blue/purple tinge in the certain lighting rather than the green-purple tinge. Blue-blocking coatings have a very slight change in colour perception. Whites will appear slightly more yellow through these lenses – probably not the best option for photographers or people requiring very acute colour perception. Having this coating prevents the blue light from entering our eyes; however, if there are still computer-related eye strain issues, it might have to do with your eye muscles in addition to the blue light (but we’ll get into that another time). 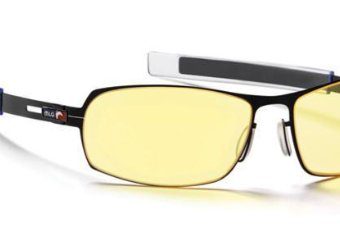 Gamers often are found wearing yellow lenses. This is also an option but not the most aesthetically pleasing. Yellow lenses absorb the light and thus prevents it from entering our eyes. These lenses are also found to increase contrast sensitivity and decrease glare.

If spending money on glasses is not an option at this time, methods you can reduce your exposure in the mean time include: decreasing your screen brightness or there are some apps/computer programs/monitor options that allow you to adjust the blue light being emitted from the screen. These are all great options to help protect your eyes from blue light.

Overall, blue-light is still a relatively new topic and research is on-going to fully understand how it affects us. Thus far it has only proven to have negative effects which is why I advise all my patients who spend 3+ hours on a computer to invest in glasses to help protect themselves. At Wink, we offer Nikon, Essilor, Hoya, and Zeiss lenses which all have their own blue-blocker coating. Come in to see us to see which lens is the best for you! We are a local Burnaby optometry clinic that is independently owned and operated.

4 thoughts on “Why is Blue Bad? | Optometry Blog”