Progressives … what are they and why would you want one? Before progressives were invented, our grand-parents and parents would often have to purchase bi-focals in order to see things both at distance and near in one pair of glasses. Due to the glorious affects of presbyopia (the aging and weakening of the natural lens in our eyes that allows us to bring things into focus at near), we require two different prescriptions to see clearly at distance and near. Bi-focals are lenses that have two clear-cut defined lenses put together into one – so when a person looks down into the near segment of these lenses they can read. There is a line that differentiates distance from near. Wearing bifocals was often a sign of age so people didn’t really enjoy wearing them. Along came progressives, where you can now see distance, near, and everything in-between in one pair of lenses WITHOUT people seeing a line and knowing your “age” per se.

A common misconception of progressives is that they are a blended bifocal – whoever came up with the definition is not completely wrong but how it has stuck around for the past 2-3 centuries I’m not sure. If progressives were a true blended bi-focal, that would imply that there are only two clear zones of vision (one for distance one for near) just with no line. But this is not true. There is more than just two zones of vision. There are in fact multiple zones of vision. Which is why it is called a progressive because the prescription is progressively changing throughout the lens to allow you to see at multiple distances.

With conventional progressives, it was often hard to adapt to these ever-changing-lenses because of the distortion that innately happens when you try to blend multiple prescriptions into one lens. As the first of it’s kind, the distortion was quite noticeable and would obstruct your vision at times depending on what you were looking at and how you were positioned. In conventional progressives, you would have to point your nose towards what you wanted to look at otherwise you would look through distortion if you didn’t (nausea was often a side affect as well). This was the down fall of all progressives and what lens companies now are putting research into to minimize. Many people would not be able to wear progressives because they simply couldn’t get used to them and would switch back into the dreaded bifocal. Despite how the bifocals appeared, there was no distortion so people would rather have the clarity over cosmetic appearance.

Along came digital progressives! At last, a method to reduce the amount of distortion in the periphery of the lenses. The difference between the conventional and digital progressives is how the lenses are surfaced – how the prescription and blending is ground into the lens. With digital surfacing, we are able to customize the lens more and digitally input the proper prescription across more points on the lens to minimize distortion. Progressives have come a long way and are still improving. Nikon, Essilor, Zeiss, and Hoya all have their own R&D (research and development) teams constantly working on new ways to minimize distortion and further customize lenses for users to have a better experience. It’s near impossible to say which brand manufacturer is the best, because we all use our eyes differently and see differently so one lens design might be better for one person while another design is better for another person. That’s why one lens cannot “rule them all” and it’s often a long process to see which lens is best for you. The first one may not be suited for you, so you need to try another to see if it jives better with your brain.

At Wink we offer a 90-day adaptation period for our progressive wearers, because we understand that the first lens we help you select may not be the right one. If within the 90-days, something just doesn’t feel right, feel free to bring them back and we can try another lens (upgrades will need to be paid for but unfortunately there will be no refunds for downgrades – always better to start lower and move up if needed). This way, we are able to do our best to help you find the progressive that works best for you – whether it be Nikon, Essilor, Zeiss, or Hoya.

With digital progressives, you will experience wider fields of view and minimal amounts of distortion. But don’t be fooled just because someone says they sell “digital progressives” as that does not encompass the many degrees of digital technology that can be put into making a lens. Make sure you ask about lens specifics and which lens you are getting – not just a generic “digital progressive”. Each level or type of progressive has a name, so ask for the name of the progressive. If they can’t give it to you then I would advise shopping somewhere that is willing to give you that information. For example, Nikon sells SeeMax, Presio Power, and the Balance to name a few. Essilor has Varilux S Fit, Comfort, and the Physio as some other examples. The names depict the technology put into the lens. 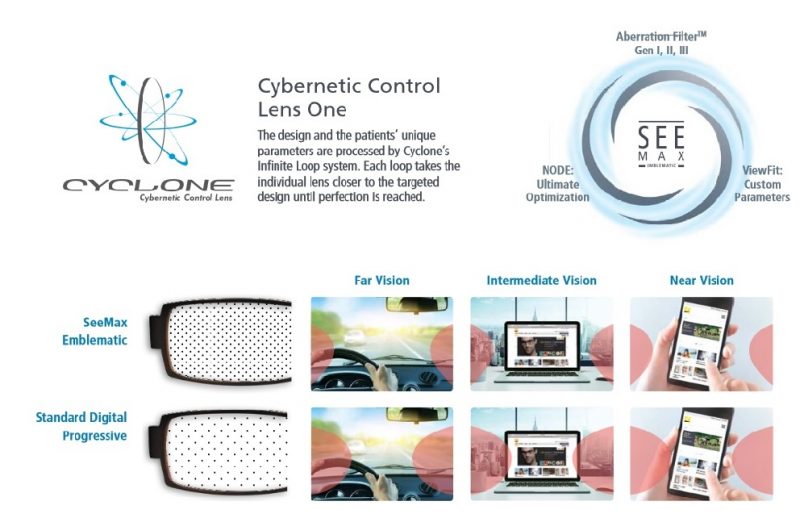 In addition to minimizing distortion, lens manufacturers are now able to customize a lens to a frame to a face. Because everyone’s face is different, a frame will sit differently depending on your features. By having this added customization, it will further provide vision clarity and lens comfort. Certain lenses will allow variable insets which allow us to decide where the reading portion will sit in the lens. Not everyone’s eyes will converge (move inwards) the same amount when they read. This variable inset allows us to account for that disparity and move it accordingly. 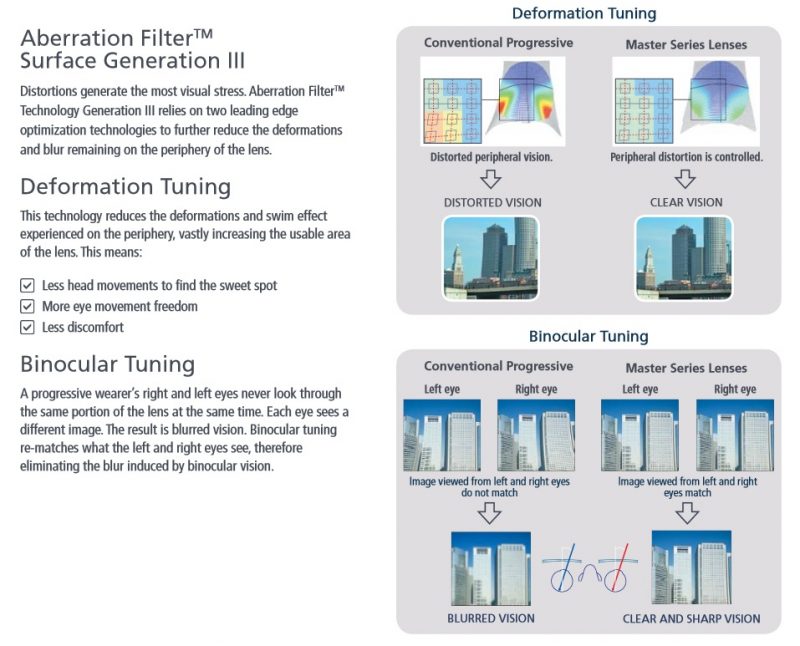 As you can see, a lot of technology has gone into progressives. Hopefully you understand why they can cost as much as they do. There is a huge variation in prices so just make sure you know what you’re buying before you put in the big bucks! If you have any questions, feel free to reach out to us here at Wink – your friendly local Burnaby eye care professionals. 🙂

One thought on “Progressives | Optometry Blog”