It’s that time of year again – back to school! September is fast approaching and that means back to school for many of our little ones. Perhaps it’s the first time being in a class room or returning to something familiar, whichever the circumstance, children need to have their eyes checked by an optometrist every year. Before school starts is usually a good time, to ensure they’re seeing their best before they start a new year of learning. I cannot stress the importance of yearly exams for children enough. The reason behind this is that our eyes grow and change just as we do when we’re kids – SUPER fast. One year their eyes might be perfectly fine and healthy and then the next year that can change without us knowing when or how. This has been the case for many children that come to our office. 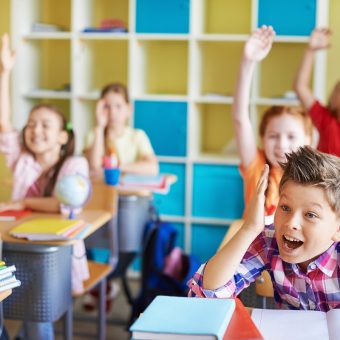 Children don’t know if what they’re seeing is “normal”. You would think that they would say something if they noticed that something was wrong with their vision, but kids actually don’t know if what they’re seeing is right or wrong. Their brains/visual systems haven’t experienced “20/20” before so if they do or don’t see the world that way they really wouldn’t know. That’s why it’s important as parents that we take the initiative to bring them to see an optometrist.

School screenings aren’t enough. Screenings are not done by optometrists who are trained to catch abnormalities through different tests. A lot of issues that can happen with kids fall through the screening tests and don’t get diagnosed until it is too late. Only an optometrist is able to catch problems at an early stage and treat the issues to prevent them from causing bigger problems later on.

But my child doesn’t know their letters or numbers that well. We see children as early as 1 year of age to check for abnormalities. Picture charts will be used instead of letter or numbers to see how well your child is seeing. Many of the tests don’t actually rely on children’s responses as they are objective.

Children’s eyes can change drastically from one year to another. As kids grow, their eyes will also grow and change with them. One year a child’s eyes could be perfectly fine with little to no prescription, and then the next one eye may have developed a prescription and the other eye not. Because the one eye is still seeing fine, it will compensate for the weaker eye that developed a prescription and your child won’t know the difference. If this goes undetected for too long, the child may develop amblyopia (lazy eye) due to the sensory deprivation from the weaker eye.

Yearly eye exams for children are crucial to ensure prescriptions and disease are caught at an early age so that they don’t impede with learning. At Wink we understand that doctors can be scary for kids. We will try to do as much testing as possible with children and whatever they are comfortable with.